Worldwide consumption of cocoa products continues to grow at about 2-3 percent or 60,000-90,000 MT per year. This includes steady growth in the area of dark chocolates, which command premium prices. Projections show global production remaining behind the increasing demand, indicating that there is a clear need for expanded production of higher quality cocoa. 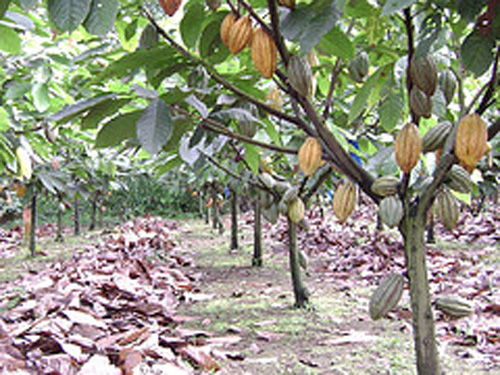 Cocoa grows well in the interspaces between coconut that otherwise is unused land. Cocoa is less labor intensive compared to many other horticultural crops. This enables a farmer to earn an additional income without much investment on inputs and labor and without any investment on land.

Another very important aspect of cocoa is that it is a perennial crop with peaks in April to June and September to November enabling the farmer to earn during monsoon while there is no other income from his farm.

In an increasingly aging world, medical researchers are seeing more cases of dementia and are looking for ways to make brains work better. One potential source of help may be flavanols, an antioxidant found in cocoa beans that can increase blood flow to the brain, researchers said. A nice cup of the right kind of cocoa could hold the promise of promoting brain function as people age.

Ian MacDonald of University of Nottingham reported on tests given to young women who were asked to do a complex task while their brains were being studied with magnetic resonance imaging.

Among the women given drinks of cocoa high in flavanols, there was a significant increase in blood flow to the brain compared with subjects who did not drink the cocoa.

This raises the prospect of using flavanols in the treatment of dementia, which is marked by decreased blood flow in the brain, and in maintaining overall cardiovascular health. But the cocoa typically sold in markets is low in flavanols, which usually are removed because they impart a bitter taste.

Hollenberg, an expert in blood pressure, studied the Cuna because those who live on native islands do not have high blood pressure. He said he found that when tribe members move to cities, their blood pressure rises. A major difference is the consumption of their own prepared cocoa, which is high in flavanols. In native areas, that is all they drink; in cities they adopt the local diet.

In addition to having low blood pressure there are no reports of dementia among the native Cuna.

‘I see a bright future for cocoa’, Hollenberg said.

Older men in the Netherlands who ate the equivalent of one-third of a chocolate bar every day had lower blood pressure and a reduced risk of death.