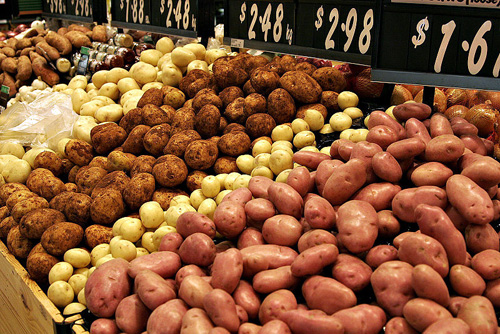 As wheat and rice prices surge, the humble potato – long derided as a boring tuber prone to making you fat – is being rediscovered as a nutritious crop that could cheaply feed an increasingly hungry world.

Potatoes has come a long way from its original cultivation in the Peruvian Andes several thousand years ago. Now, about 350 million tons are grown each year, making potatoes the world’s third most-important food crop after wheat and rice.

With the world population expected to grow to 10 billion by 2050 and with most of that growth in the developing world, the need for a nutritious and fast-growing food is more critical than ever. A good source of nutrients like vitamin C and potassium and virtually fat free, the potato is also smart.

‘It’s one of the most efficient ways to convert seed, land, and water into nutrients for human consumption’, says Lee Frankel, president of the United Potato Growers of America.

‘The potato is a good barometer of developing economies’, says Daniel Gustafson of the UN’s Food and Agricultural Organization. In Europe, potato production has fallen by 1 percent every year for the past two decades, while the developing world – led by India and China – has been increasing production by some 5 percent a year over the same time.

India has told food experts it wants to double potato production in the next five to 10 years. China, a huge rice consumer that historically has suffered devastating famines, has become the world’s top potato grower. In Sub-Saharan Africa, the potato is expanding more than any other crop right now.

Peru’s leaders, frustrated by a doubling of wheat prices, have started a program encouraging bakers to use potato flour to make bread. Potato bread is being given to school children, prisoners and the military, in the hope the trend will catch on.

Some consumers are switching to potatoes. In the Baltic country of Latvia, sharp price rises caused bread sales to drop by 10-15 percent, as consumers bought 20 percent more potatoes, food producers have said.

The developing world is where most new potato crops are being planted, and as consumption rises poor farmers have a chance to earn more money.

‘The potato allows countries to get more value out of their land, their water, and the time spent cultivating because it can be used in so many ways’, says Gustafson.

Potatoes can be grown at almost any elevation or climate: from the barren, frigid slopes of the Andes Mountains to the tropical flatlands of Asia. They require very little water, mature in as little as 50 days, and can yield between 2 and 4 times more food per hectare than wheat or rice.

‘The shocks to the food supply are very real and that means we could potentially be moving into a reality where there is not enough food to feed the world’, said Pamela Anderson, director of the International Potato Center in Lima, a non-profit scientific group researching the potato family to promote food security.

Like others, she says the potato is part of the solution.

The potato has potential as an antidote to hunger caused by higher food prices, a population that is growing by one billion people each decade, climbing costs for fertilizer and diesel, and more cropland being sown for biofuel production.

Potatoes are a great source of complex carbohydrates, which release their energy slowly, and – so long as they are not smothered with butter – have only five percent of the fat content of wheat.

They also have one-fourth of the calories of bread and, when boiled, have more protein than corn and nearly twice the calcium, according to the Potato Center. They contain vitamin C, iron, potassium and zinc.

Genetically modified potatoes that resist ‘late blight’ are being developed by German chemicals group BASF. The disease led to famine in Ireland during the 19th century and still causes about 20 percent of potato harvest losses in the world, the company says.

Scientists say farmers who use clean, virus-free seeds can boost yields by 30 percent and be cleared for export. That would generate more income for farmers and encourage more production as companies could sell specialty potatoes abroad, instead of just as frozen french fries or potato chips.

For developing countries, potato is an excellent option for both food security and also income generation.