Have you observed that all the people on earth who are qualified and skilled workers, and who have achieved a measure of success in their professions, can be placed in two categories?

The first category of people succeed in whatever is given to them to achieve. As long as they have someone to direct them and set work goals for them, and are given the opportunity to achieve them, they will keep on achieving, oftentimes to great levels of excellence. In this category you will find all types of people – professionals, executives, housewives, students.

The second category of achievers comprise those professionals who are always coming up with new ways to perform a task, or with offbeat concepts that result in innovative products or services. They dare to think beyond the parameters set by their revered teachers, mentors, and managers. They are never bound by traditional systems, rules, or boundaries. Their eyes are constantly looking around for new shapes and fresh avenues, their minds are continually pondering an unusual phenomenon or a novel concept. Their ears are ever sensitive to catch a new sound. Their fingers never desist from handling a never-before handled objects. These are the kind of people who daily live by the motto stated by that great advertisement copy I once saw on tv: ‘When was the last time you did something for the first time in your life?’.

Such are the people who found new enterprises and keep them going from strength to strength through decade to decade with ever innovative products and fresher services. Among them you will find Bill Gates, Steve Jobs, Herbert Kelleher, Lee Iacocca, Ralph Welsh, and even my fellow villager, Appu, who came up, in my young days, with a revolutionary way for yoked oxen to pull with less struggle a cartful of burdens.

Appu just placed a lining of rubber on the round surface of the wooden wheels of the ox carts. But what a awesome difference it made to the oxen in my land, and what a difference it made to the ox drivers who now could have a far less bumpy ride to the market and back; there’s now no need for them to use their whip as frequently as before on the poor creatures’ already-split hides – split by the merciless lashes they received when they just couldn’t climb the steep country roads steadily with a ton of race sacks bearing down on their napes!

For thousands of years, ox carts ricketied over earth’s rough terrains on wooden wheels. And even after rubber was discovered, wooden wheels continued to be standard equipment for hundreds of years. Nobody had stretched their imaginations far enough to device a way to make cargo transport in my land more convenient, until Appu.

I suppose most human workers fall under the first category. They are good achievers on someone else’s ideas and opportunities. But when it comes to their discovering something on their own, or creating their own ideas, or creating new opportunities where none existed before, they are stumped.

There are two achievers of the first type in my hometown in India. One of them is an excellent dressmaker with his own boutique. The other is a seller of excellent coffee powder.

Both of them were once excellent achievers in their fields, and they were aware of this fact. So the dressmaker gave his shop the name Expert Dressmakers. The coffeeseller went one step further. He named his four by four meter cubicle of a shop ‘All India Coffee Industries’. Not ‘Industry’, but ‘Industries’. And why not, his coffee was so good he saw no reason why he could not have a conglomeration of industries arising from his shack.

A month ago, when I went to my hometown, these two achievers who set up their businesses 40 years ago, were still doing their trade as diligently as ever. The dressmaker is aged, but he still has the same shop churning out expertly tailored dresses as he has been doing since my father’s days. He used to make the best suits in the town in those years. I just couldn’t forget the first suit that I wore proudly to the Gulf, a product of the expert craftsmanship of this mastertailor.

So, on this latest visit to my hometown, I bought expensive material for a couple of suits and gave it to this noted dressmaker. And he made them with the same excellent expertise and in the same style that he made one for me 25 years earlier.

Of course, I had to throw the suits in the garbage bin soon after trying them on once. The style was fashionable a generation ago, but today if I walk around in them, people would think that I had inherited the suits from my father. 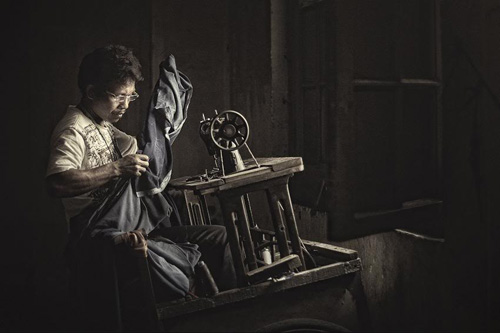 As for the coffeeseller, his hair is grey now but he still sits in his four by four meter shack, selling coffee powder whose aroma is still as tantalizing as it was to my nostrils eons ago. And he still has the same signboard ‘All India Coffee Industries’ outside his shop.

You see, these two professionals in my hometown are simply victims of the loss of their most creative opportunities with their parents. They might have been good students at school, getting good grades in everything they learned from their teachers. They became skilled workers and experts with all the knowledge they were taught by someone else.

But once people stopped teaching and monitoring them, they stopped learning, and they stopped accomplishing anything new. They remained all their lives under the ceiling and within the parameters of what they were initially trained for. They did not know how to educate themselves beyond their taught ceilings. They couldn’t demolish the opportunity barriers erected around their imbibed knowledge boundaries and soar to new unexplored frontiers. They could think in new dimensions only if someone else’s thoughts blazed through old frontiers and took them there.

These excellent but constrained achievers are simply victims of the loss of their most creative opportunities with their teachers. They might have been excellent students at school, getting exemplary grades in everything they learned in the classrooms. They became skilled professionals and experts with all the knowledge they were taught by someone else. But when the times changed and with it the methods, these achievers continued to further hone their old skills.

Thomas J. Watson is the most famous name in IBM’s history. He was the chairman of IBM in the 1920s to the 50s, and the main architect of making IBM an international company.

The first thing anyone saw on entering his office was a plaque on the wall above the head of the IBM chief. It had just one word written on it: THINK.

The IBM chief explained that the greatest fault he found in talented executives was that they did not think for themselves. Said Thomas J. Watson:  ‘ “I didn’t think” has cost the world millions of dollars.’

Many companies started following the IBM chief’s example and put up THINK signboards for their employees to ponder over. Then in the 1970s, long after Thomas J. Watson was gone, THINK signboards were pulled down from IBM walls.

Thinking, you see, began to lose its appeal since the 70s decade. In fact, today the chic thing to do is not think too deeply. You cannot buy a THINK wall slab anymore, but you can purchase another one over the internet. Here is the image of that bestselling sign: 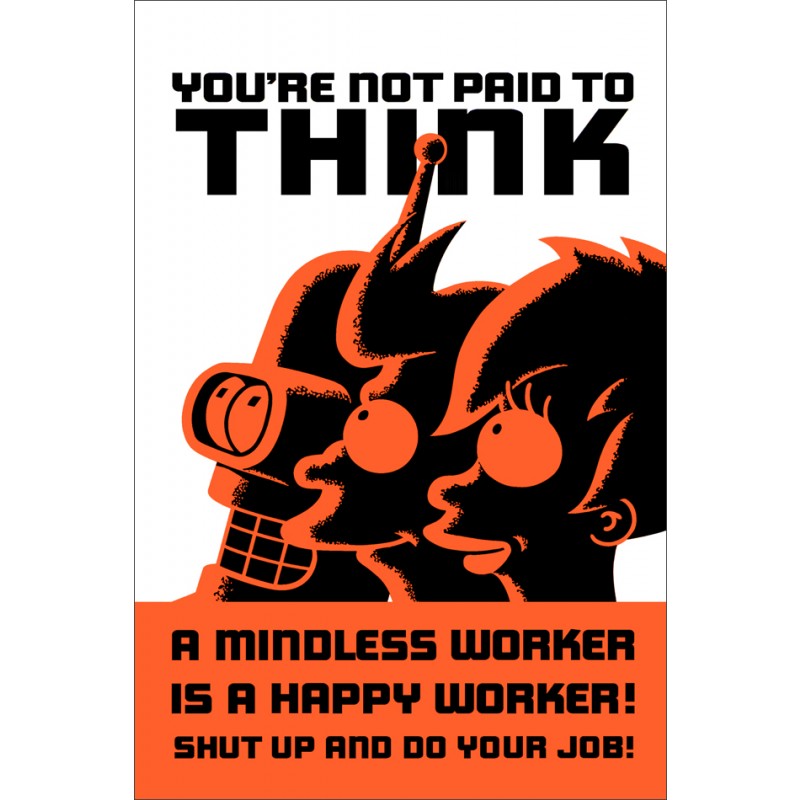 The company that makes that signboard and sells it in millions has given a rationale for their signboard. This is what their advertisement says:

‘This magnetic board can remind you of all sorts of things, from the dull meaningless existence that is your work life to a large number of tasks you have to do. As the sign reminds you, you are not paid to THINK…anything that eases the burden on your brainpower is surely a welcome addition to any home or office.’

Though obviously intended to be facetious, what the sign says is nevertheless symptomatic of our present age.

There is a worldwide conspiracy to thwart men and women of exceptional caliber from exerting brainpower beyond the sheepfold. Don’t be swayed by any awesome phenomenon or product that could distract your mind from generating its own innovative thoughts – whether it is a latest gadget that could make obsolete or redundant your mental skills, or a sweeping corporate fad that belittles a timeless virtue, or an alluring doctrine from spiritual gurus that rationalizes an aberrant lifestyle.

Beware of teachers, preachers and researchers who ease your need to think your own ideas and generate your own original ways to make your life and other’s lives more productive, enjoyable and meaningful. When you are an original thinker, constantly applying newer and more effective methods to make work more rewarding for yourself and others, you are automatically ensuring the perpetual usefulness of your achievements.

So, if you want be an achiever whose work is always in demand, be constantly fresh and daring in your thoughts, and keep moving from one innovative level to a higher level. Think for yourself and you have already placed yourself on a future pinnacle of achievements where the usefulness of your work will last even beyond your generation.