‘I heard a story once about the white noise caused by Niagara Falls. A long time ago, a bunch of spring ice jammed up the river so much that the falls stopped. The silence was so deafening that it woke up everyone living around the falls.’    w5.montreal.com 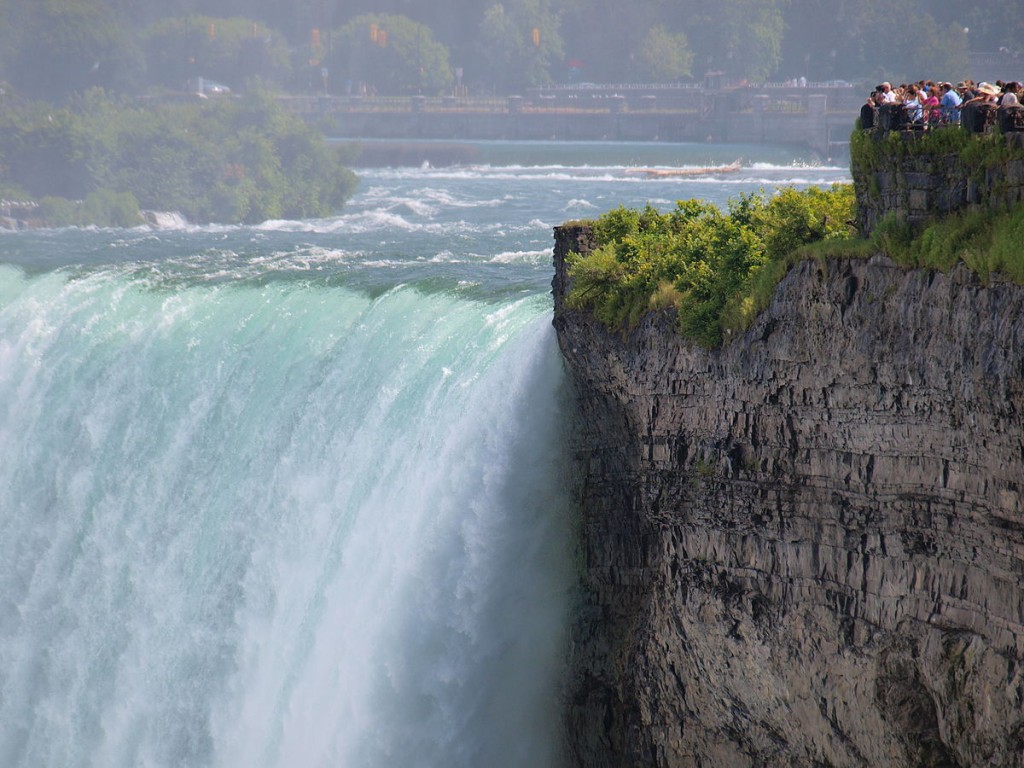 Noise pollution is causing more damage to the balance of human life than people generally realize.

Older males exposed to significant occupational noise demonstrate significantly reduced hearing sensitivity than their non-exposed peers. A comparison of Maaban tribesmen, who were insignificantly exposed to transportation or industrial noise, to a typical U.S. population showed that chronic exposure to moderately high levels of environmental noise contributes to hearing loss.

High noise levels can contribute to cardiovascular effects and exposure to moderately high levels during a single 8 hour period causes an increase in stress and vasoconstriction leading to increased blood pressure as well as to increased incidence of coronary artery disease.

Noise can have a detrimental effect on animals, increasing the risk of death by changing the delicate balance in predator or prey detection and avoidance, and interfering the use of the sounds in communication especially in relation to reproduction and in navigation. Another impact of noise on animal life is the reduction of usable habitat, which in the case of endangered species leads to a speedier extinction. Noise pollution has caused the death of certain species of whales that beached themselves after being exposed to the loud sound of military sonar.

Governments until the 1970s viewed noise as a ‘nuisance’ rather than an environmental problem. In the United States, there are federal standards for highway and aircraft noise; states and local governments typically have very specific statutes on building codes, urban planning and roadway development.

Noise laws and ordinances vary widely among cities. An ordinance may contain a general prohibition against making noise that is a nuisance, or it may set out specific guidelines for the level of noise allowable at certain times of the day and for certain activities.

In UK, thousands of confiscations have been authorized involving the removal of powerful speakers, stereos and televisions.

In the US, Portland, Oregon, instituted the first comprehensive noise code in 1975. The Portland Noise Code includes potential fines of up to $5000 per infraction and is the basis for other major US and Canadian city noise ordinances.

In Nigeria, the Lagos state government, in response to the public outcry, renewed its war against noise pollution in the state. It issued a stern warning to various religious groups, music studios, video clubs and others to reduce the noise level in their activities or face the wrath of law.

Noise pollution is a major problem in countries like India during the festivals of Diwali, Navaratri and Ganpati. The Government of India has regulations against firecrackers and loudspeakers but enforcement is extremely lax. Awaaz Foundation is an Indian NGO working to control noise pollution from various sources in Mumbai through advocacy, public interest litigation, awareness and educational campaigns since 2003. 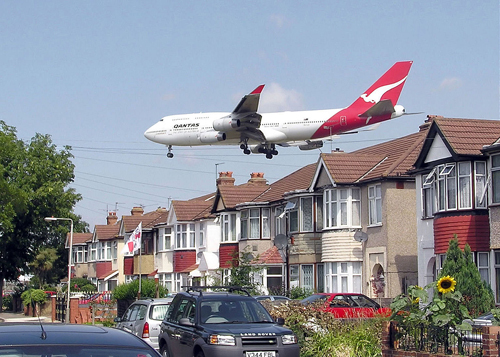 A Qantas Boeing 747-400 approaching runway 27L at London Heathrow Airport, England. The houses are in Myrtle Avenue, at the south east corner of the airport. Photographer’s note: I know this aircraft looks as though it was inserted in a graphics program but the picture is genuine. Aircraft pass close to Myrtle Avenue every 2 minutes when 27L is in use, so getting shots like this is easy.  Photographed by Adrian Pingstone.

Some Suggestions for Noise Reduction

Roadway noise can be reduced by the use of noise barriers, limitation of vehicle speeds, alteration of roadway surface texture, limitation of heavy vehicles, use of traffic controls that smooth vehicle flow, which reduces braking and acceleration, and redesign of tire.

Roadway noise includes signal noises – car locking beep, horns, truck backing up. Another severe noise source are ‘the aural terrorists who ride motorbikes that shake people awake or who drive a car with a [sound] can attached’.

Aircraft noise can be reduced by using quieter jet engines. Altering flight paths and the use of runways has benefited residents near airports.

Industrial noise can be addressed by the redesign of industrial equipment, shock mounted assemblies and physical barriers in the workplace.

‘The mechanisms at work that can cause noise need to be clearly identified, understood, and modeled. In the battle against noise, computer modeling has an important role to play. It makes it possible to identify the sources of noise, model their behavior, predict the way in which the sound carries, and test solutions to reduce noise. When a new product is designed, whether it be a vehicle, a tool, or a household appliance, simulations like these help find ways of reducing noise in early stages of the manufacturing process, sometimes even before a prototype is made.

‘There are many areas of research specifically dedicated to fighting noise pollution. One such field of study is the characterization and development of sound-absorbing or damping materials. Another pertains to complex situations like multisource (planes, trains, cars, etc.) and multisensory (noise and light, noise and vibrations, etc.) exposure. This type of research frequently needs to include other aspects associated with noise such as mechanical and safety factors. But above all, they also need to include the human factor–how we perceive noise. Research is underway to clarify the definition of annoyance, a highly subjective notion linked in particular to culture and education, and to determine its characteristics using reliable indicators.

‘Lastly, the battle against noise involves describing and planning the urban acoustic environment. And Europe has taken a keen interest in the matter: the 2002 European Directive makes it compulsory to draw up noise maps for large cities and major routes of transportation, whether it be road, rail, or air. The number one priority is to inform and create a public dialogue about this issue, in order to lay out comprehensive urban traffic maps.’   National Center for Scientific Research – www2.cnrs.fr

On the personal level, you as a city resident can ponder initiating several actions within your power or influence to mitigate noise in your community or even in your home (remember,

The world is getting louder by the year and there is great need for noise busters to rise and join the crusade to bring peace and quietude to the world.