Glaring Mistakes in English Usage
That Even Smart Writers Make

Howler  –   ‘ A stupid or glaring mistake, especially an amusing one.’
Blooper  –   ‘An embarrassing error.’
Gaffe  –   ‘An unintentional remark causing embarrassment to its originator.’

A slip on Marilyn Monroe’s dress 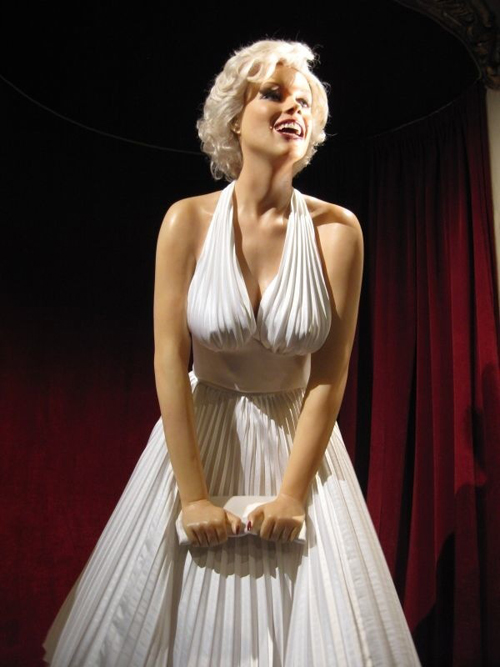 ‘There is one collector who claims to own the lion’s share of Monroe memorabilia…Investment banker and collector David Gainsborough Roberts… Roberts’ collection may be extensive, but the jewel in the crown for him would be the billowing white dress worn by Monroe in 1955 film “The Seven Year Itch.”  ‘Owned by film star Debbie Reynolds, Roberts said that it is going up for sale in Las Vegas this summer. ‘Every time I talk to Debbie, she mentions millions’, said Roberts.’   CNN article, ‘Why gentlemen still prefer Marilyn Monroe’.

There’s a ‘dangler’ in the second paragraph. A dangler is a sentence that leaves the first part of its statement dangling in the air. CNN first states, ‘Owned by film star Debbie Reynolds’, and the next thing it mentions is Roberts, leaving the white dress dangling in limbo. The undangled sentence would read:

‘Owned by film star Debbie Reynolds, the dress is going up for sale in Las Vegas this summer, said Roberts.’

But that’s not the only slip in that CNN article. The way “The Seven Year Itch.” is punctuated really itches sensible writers. The unquote (”) is meant for the Itch, not for the whole sentence. The period is meant for the whole sentence, not for the Itch alone. But now it seems that the title of the movie includes the period, and the sentence is left without an end. The sensible way to punctuate:

‘Roberts’ collection may be extensive, but the jewel in the crown for him would be the billowing white dress worn by Monroe in 1955 film “The Seven Year Itch”.’

Never slip on your commitments

‘We are committed to continuously widen the association with Indian academic institutions in international higher education. TECOM Education Cluster is confident our partnership with institutions of higher learning from India – inspired by our common mission to deliver quality education – will continue to open promising academic avenues for the UAE and the regional student community.’   Dr Ayoub Kazim, Managing Director, TECOM Investments’ Education Cluster, Dubai, at the annual conference Emerging Directions in Global Education held in New Delhi.

When someone I newly employ tells me, ‘I am committed to fulfill all the job responsibilities you give me to your total satisfaction’, I may not doubt his sincerity, but I certainly question his ability to speak and write in the way I want my professionals to communicate. Dubai’s prestigious TECOM Education Cluster comprises the Dubai International Academic City (DIAC) and Dubai Knowledge Village. DIAC is, in their words, ‘the premier destination for higher education in the region’, and its campus is host to over 18,000 students of more than 100 nationalities. These students have access to over 300 higher education programmes, but one vital programme seems to be missing – on professional English usage. Any student graduating with the highest distinction from DIAC, and then going around using sentences such as the one Dr Ayoub Kazim used at the global conference, is certainly going to put a slight blotch on TECOM’s reputation as a ‘premier destination for higher education’. Be careful when you use the word ‘commit’ with the preposition ‘to’. The verb these 2 words always takes the ‘ing’ form. Examples:

‘When a man marries, he is committing himself to providing his wife all her needs and wants.’ ‘The firm has committed itself to completing the project with its present workforce.’

So, Dr Ayoub Kazim should have said:

‘We are committed to continuously widening the association with Indian academic institutions in international higher education.’

Slipping on the floor of Starship Enterprise

Panorama of the Enterprise’s bridge from the 2009 Star Trek film.

I was watching my favorite tv serial, Star Trek. The episode that was being shown was ‘Half A Lie’, in The Next Generation series. A female member of the starship community had fallen in love with an alien who is a visitor on the Enterprise. Towards the end of the serial, the visitor tells the woman that back on his planet when a person reaches the age of 60, they kill themselves before they become a burden to their relatives and to society. The lover had reached his time to die. When the day came for the visitor to return to his planet and end his life, the woman mourns the impending suicide of her lover, and plans to go with her lover. The woman’s daughter, an officer of the starship, tries to comfort her with the words:

‘You’ll never be one of those who dies before they die’.

Pardon me, lady officer, you certainly arent talking just about your mom who is going to die before she dies, but about all the other people as well who die in the same unnatural way. Pull up your slip, ma’am, or your reputation is going to slip down on the sleek starship floor.

‘You’ll never be one of those who die before they die’.

[MORE SLIPS ON THE WAY!]

Photo on top of the page beside subheading courtesy of Eva Machandel (evamachandel – flickr.com).